The dream is to stand on stage, hold that mic and tell your jokes, do your bits, get some laughs.

Then you usually want to do it again… and again. But after doing the mics around town and getting in more than your fair share of ‘bringer’ shows, something gnaws at you to move beyond that. You want to do it in front of a ‘real’ audience.

Some of you might even have the desire to take your act on the road for a spell.

So how do you do get to go on the road and get paid? In a word, the answer is ‘work.’

Getting the Gigs is About Work and Relationships

Usually in order to hit the road these days you need to have about thirty minutes of material. Being able to get up in front of an audience and do thirty minutes, a solid thirty, qualifies you to work as a ‘feature act.’ A feature act is usually the comedian who goes on after the emcee and before the headliner.

We tweak the new material, tighten the structure, clarify the associations that sometimes keep the joke from tracking clearly, we add act-outs, tags, toppers, etc.

Taking the notes from the feedback in class and adding it to the material helps the material develop faster and helps you reach your laugh-point goals. The class also gives Byron a weekly writing goal.

The second thing that Byron does well is he goes out to the mics. He mingles. He meets people. That’s how he got this gig.

In my classes, I also hook up comedians (who are ready) with some of the bookers I have relationships with, who book these gigs.

Sometimes, just a word to the booker can help that booker feel like they are making a more informed decision to book a new comedian.

Getting the gig is only one step. Now you gotta hit the road, shake off the nerves and get up on stage in a strange place with a new kind of pressure.

A Comedian Must Learn to Take Some ‘Bullets’

On the road, the feature act has to take some bullets.

In an ‘A’ comedy club, there is usually a house emcee who does about ten minutes and warms up the audience.

But in a one-niter club, it’s a little different. You’re usually in a converted bar, or showroom of some sort and the emcee is a bartender or a local guy who gets up and tells a joke or two (if you’re lucky), then introduces the feature act; sometimes in a way that barely resembles and introduction.

Most of these guys haven’t had any training, they haven’t really warmed up the audience… they just bring you up to a cold room and a cold stage. As a result, the feature comedian is now responsible for warming up the audience, getting some laughs and keeping their attention.

Sometimes it takes a few minutes; in some cases, thirty minutes.

That’s why we call it ‘taking bullets.’

But if you’ve done your work, if you’ve put in your time and you display your showmanship; never letting them see you sweat, following through with your professionalism and your ‘A’ material, then you could do really well…

… and if you’re smart, you’ll learn a thing or two.

Or a million things.

That’s what Comedy Clinic student, Bryon Valino did last week. He hit the road, went up to Oregon and performed at the Mill Casino in North Bend. His first ‘road’ gig.

Byron’s worked other show situations in town and out to get him prepared for the road gig. He did some college shows for Cal State Northridge and he booked a local comedy club with comedian and friend Tony Ming and they put butts in the seats and did 20-30 minutes each to get prepared.

Byron’s got some solid material. His delivery is somewhere between a version of Steven Wright and Anthony Jeselnik. It’s not fast, it’s not super edgy or tremendously energetic. But he is funny.

It’s one of those acts that needs the audience to pay attention. He’ll do great in ‘A’ clubs where the audience is there to do one thing; watch comedy, but in some of the road rooms, the comedy show is just a way to kill time, maybe get drunk before going dancing or to a party or to ‘hook up.’ In those rooms, you learn to work a lot harder.

Why Do Those Gigs?

Some people ask if those gigs aren’t as great, why do them? For that answer we might ask the mountain climber why he climbs Kilimanjaro; ‘Because it’s there.’

Those gigs give you chops. They give you a great place to practice doing your thirty. They build you stronger and faster and sharpen your instincts like nothing else. And like climbing Kilimanjaro, you could die.

In a nutshell, when you learn to play the road, you can play anywhere.

It Helps to Work with a Good Headlining Comedian

When you play the road, you come back a better performer. Instantly more seasoned and with a fire to do more, work harder and get back out there. Especially if you were lucky enough to work with a good and helpful headliner.

Bryon worked with Tommy Savitt. Tommy is an award-winning comedian who’s been on the road almost as long as I have. Tommy has done T.V. and toured all over the world. Tommy’s got chops. He’s also got compassion and he chatted with Byron both before and after his sets.

So Byron did the work, developed his set, hit the road and did his thirty minutes.

Can’t wait to see him again in class. He’ll be sharper, stronger, fearless and ready to develop more material. Because something tells me he’s got a new goal; to get to sixty minutes.

You Rock, Byron! Keep up the solid work, soon it will be your name on the Marquis!

Take a moment to leave a comment below and send a shout out to Byron! 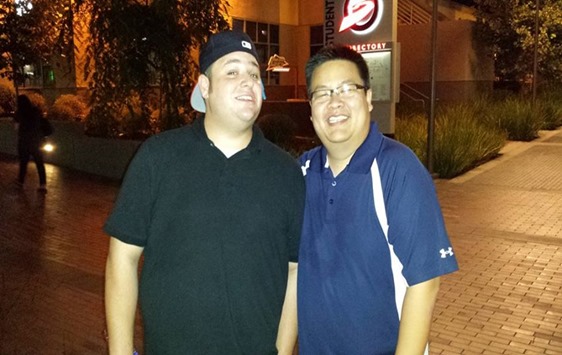