If you’ve been keeping up, then you know how much I love to study comedy structure. I’ve broken comedy down into 12 major comedy structures that all the greats use. In fact, great or not, when an audience laughs, odds are they laugh because one or more of the 12 major structures are in play.

Let’s take a look at Marc Maron. He’s always made me laugh. He’s to the point, he’s truthful. If he didn’t step away from comedy for so long, I think he would be one of those comedians who could stand alongside Louis C.K.

After you watch this short clip, let’s look at the structures in play.

Marc Marin – Dirty Texts
[KGVID poster=”http://www.standupcomedyclinic.com/wp-content/uploads/2015/02/marc-maron.png” width=”640″ height=”360″]https://s3.amazonaws.com/standupvid/Dirty+Texts+-+Marc+Maron-hwWjdS8hPp0.mp4[/KGVID]
Marin has kind of a throw-away, I-don’t-really-give-a-shit-if-you-laugh delivery. Notice that he still allows time for the audience to enjoy the humor. Each time the audience laughs, comedy structure is in play:

Another laugh at the act out. Again recognition is in play. Haven’t we all shown someone a stupid, whacky or crazy texts? But this is all a set up for the larger 3-way build-up (triple) play, because what’s next?

…then on the fifty-first text was a picture of her pussy…and I said, “Well, maybe…you know…I could…you know…”

It shattered our assumption because he laid out two early opinions building up to how crazy this chick was and there’s NO WAY I could get involved with this…
He totally misdirected us then POW! Shattered our prediction of where he was going.

Also he has recognition still in play because guys will let a lot of stuff go when sex is involved, right?
In addition, Marc’s delivery is so damn conversational and real, that we recognize that nuance in people.

But that’s not all, let’s listen to the next joke where he uses recognition again then incongruity:

And here comes the incongruity:

“…there was a part of me that was thinking…you know, “I don’t have to be afraid to put things in there…” (things in a bookcase juxtapose with things in a p*ssy. One won’t give you a disease both they both relate) Clear incongruity.

“…and I know that will last…” Incongruity again juxtaposing relationships with the bookcase.

So there you have it. Marc Marin uses structure in his comedy too. When a laugh is present. Structure is present.

Feedback? Leave me some notes. Love to hear your interpretation!

Marc Maron’s Secret to Captivating the Audience Sitting or Standing 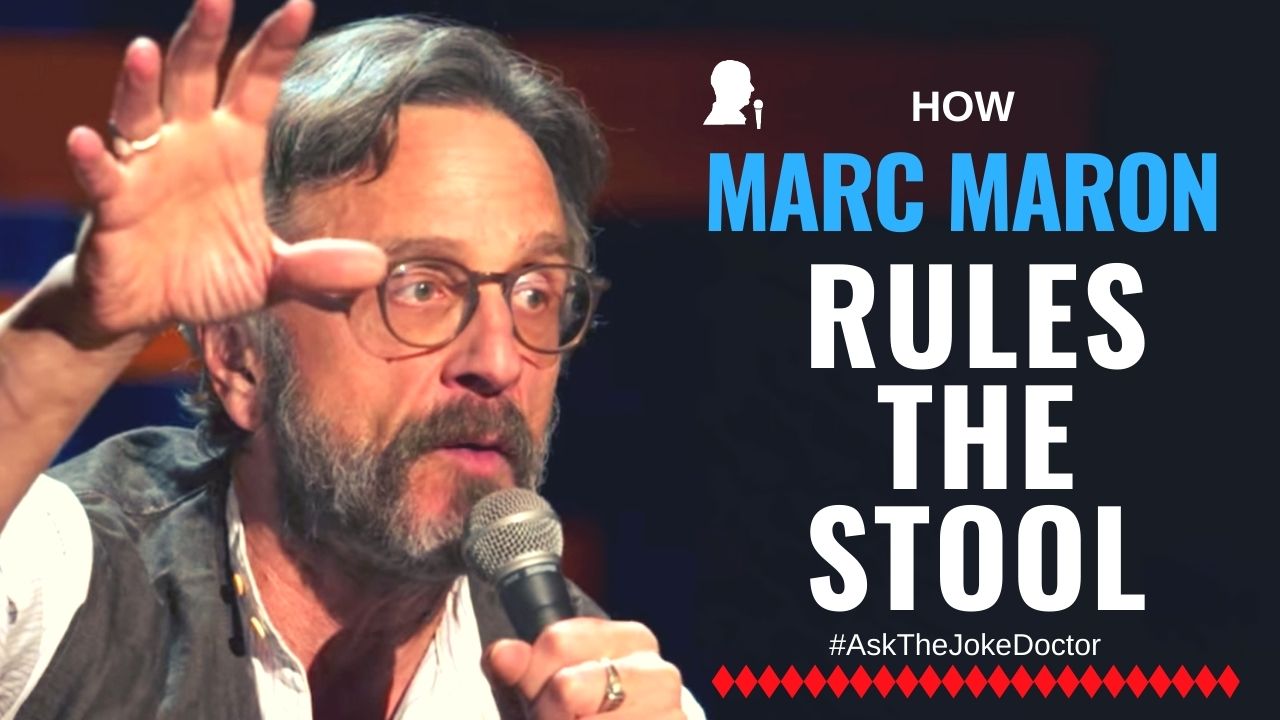 Marc Maron’s Secret to Captivating the Audience Sitting or Standing