Take a look at this quick video with Jerry Seinfeld on Jimmy Fallon talking about “The worst I ever bombed, then read about my worse bomb ever and then go ahead and share your worse bomb ever!

Have you ever bombed?

I think all of us who’ve ever done stand-up comedy have bombed at one time or another.

Whether you have bombed or not doesn’t mean anything. What you do with that experience defines your character.

I remember the worst time I ever bombed. Sadly, it was voluntary. Well, the bombing wasn’t voluntary, meaning it was unpaid. It was very early in my career. (Here is where we see the wavy lines on the screen and the weird “time-travel” music).

My best friend, Adam had a band that played jazz and funk at restaurants and bars around L.A. and I used to do the breaks. So whenever the band took a break, I would get up and do ten or fifteen minutes while the band rested.

One of the worst gigs you can do is when nobody expects comedy and this is usually the case when there’s a band playing. But it was a mic, you know? To top it off, I didn’t have to fight 20 other comics for a spot to do 5 to 7 minutes.

We were at this place called “The Rusty Pelican” a seafood and steakhouse in Calabasas, California, right next to a Porsche dealership. The band ended their set and I went up to do comedy and nobody was really listening.

These three preppy guys saw that I wasn’t doing well and they were like sharks smelling blood. I think I actually heard them say, “Look, that dude is bombing, let’s go fuck with him.”

They came right up the the front of the stage and just kept saying the worst stuff.

When one of them ran out of breath, the other one started. It was tag team heckling and I wasn’t allowed to tap out.

I wound up saying something like. “Well, this isn’t going to work,” and I just said, “At least you can enjoy the music.”

I stumbled off stage, then I remembered I was recording the set. I turned around, grabbed my recorder and said to the audience,  “Can’t forget this. It’s my black box. It recorded everything that led up to the crash.”

I think it’s like the only laugh I got.

Some comedians, when they relive their bombing stories, talk about all their friends being at the event: “Oh my God it was the most humiliating thing I have ever experienced! I mean, my friends and family were there!” They came up to me afterward and said, “That was brave,” or “At least you had good stage presence…”
Or worse, after an experience like that some comedians never step on stage again!

At the Rusty Pelican I didn’t have comments afterwards from my friends, because my friends who were there were so embarrassed, they left before the set was over.

So I went to the bar, grabbed a beer, went to a dark corner and sank as deep as I could into a booth. I was going to just sit there and get drunk. Then, half-way into my beer I sat up and thought, that is never going to happen to me again!

Don’t get me wrong the thought was preceded with how I could break the beer bottle on the table and disfigure the bastards who heckled me.

But I thought it through and realized there is no way I would do that because if I did I would probably never be invited to play the band’s break again, I would probably go to jail and the most important reason: I’m way too much of a wimp!

In retrospect, for me, it was the worst experience and the best experience wrapped up into one, because I didn’t finish that beer. I went home, took that recorder, listened to every line those guys said, wrote them down and then wrote like thirty comebacks.

That exercise led me to come up with a bunch of responses that I could use any time whether I was being heckled or just not getting laughs!

One memorable line I wrote and can still use today is: “I don’t blame you guys for acting out. You’re probably still healing, trying to find a way to embarrass someone else the way you did your mother, when she popped you out of her vagina.”

That One Gig Is Not that Important

One thing we have to learn EARLY in our careers is this: That one gig that seems so important at that moment, isn’t. It’s just one gig.

Whether we bomb because it was a heckler issue or because we just had a horrible set, no matter where we are, at whatever level, it’s just ONE GIG!

We have to learn that everything isn’t riding on that one gig, because when you look back you will realize how insignificant that one gig really was, in terms of humiliation, because the humiliation is short-lived.

We take our biggest leaps from our biggest mistakes, but only if we embrace them, find solutions to the problems and apply the solutions.

That’s when you come out on the other side, sharper, smarter and faster. That’s what I did with the lesson from my worst bomb ever. And all I can say is I wish those guys would heckle me at a show today!

That gig at the Rusty Pelican was significant to me. It made me realize that I needed more tools to deal with hecklers. But as far as humiliation goes? I’m still here, working and making a living in comedy. The Rusty Pelican in Calabasas? They went out of business 15 years ago! 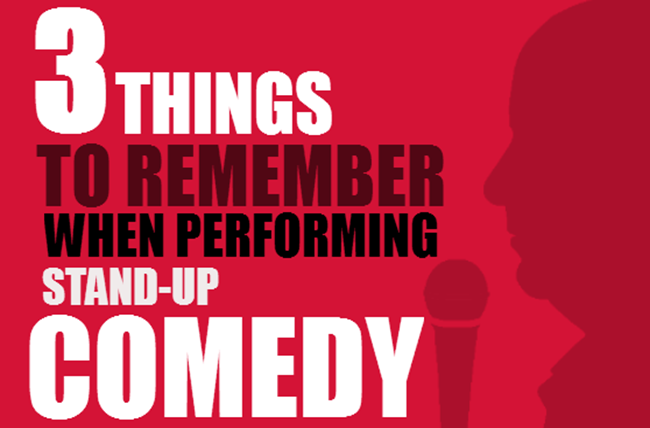 How to Write A Joke – Jerry Seinfeld Style

How to Write A Joke – Jerry Seinfeld Style