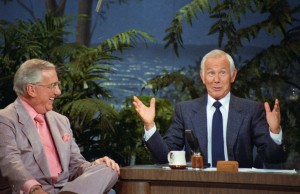 File photo of television entertainer Johnny Carson (R) shown alongside co-host Ed McMahon during a taping of ‘the Tonight Show’ on May 11, 1988 in Los Angeles. Legendary television entertainer Johnny Carson has died of emphysema at age 79, the NBC television network reported on its Web site on January 23, 2005. Carson hosted NBC’s popular “The Tonight Show” for nearly 30 years, long dominating late-night television with an estimated 12 million viewers each night. He did his final show on Friday, May 22, 1992, which was seen by an estimated 55 million people. EDITORIAL USE ONLY NO SALES REUTERS/Bettman/Corbis