Telling a story in comedy is good. Did you know that one of the most
popular comedy teachers in L.A. says, “Don’t do stories!”
Funny, because some of the most successful comedians in the business
do stories. Jerry Seinfeld? Stories. Bill Cosby? Stories. Dane Cook?
Stories. Sometimes I wonder if those instructors watch comedy.

The key is to have laugh points in your stories. The stories should
be filled with surprises and word play that keeps the audience laughing
while you are trying to make your point. The story should also end with
a solid punch and utilize interesting and compelling language.
That will separate you from the pack. 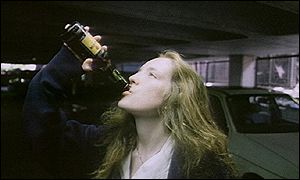 My writing partner, Rob Rose,  is great at coming up with compelling language. He can make the most mundane thing sound brilliant and funny. For example: we were writing a story about an “ex” who has a drinking problem.

She would sneak out to the garage to drink beer, while the rest of the family was watching television. The problem was that she would then accuse the husband of being a bad father. So he wrote,

“I’m giving the kids baths, helping them with their homework and she’s downing ‘road-cokes’ in the garage with the f*cking lights out.”

You can even remove the profanity and it still jumps off the page and
heightens the impact of the story. The sheer delivery and uniqueness
of the use of euphemisms will get a laugh simply because it’s
a funny way to say she was in the garage drinking beer.

So say it, but only different, and stand out from the pack!