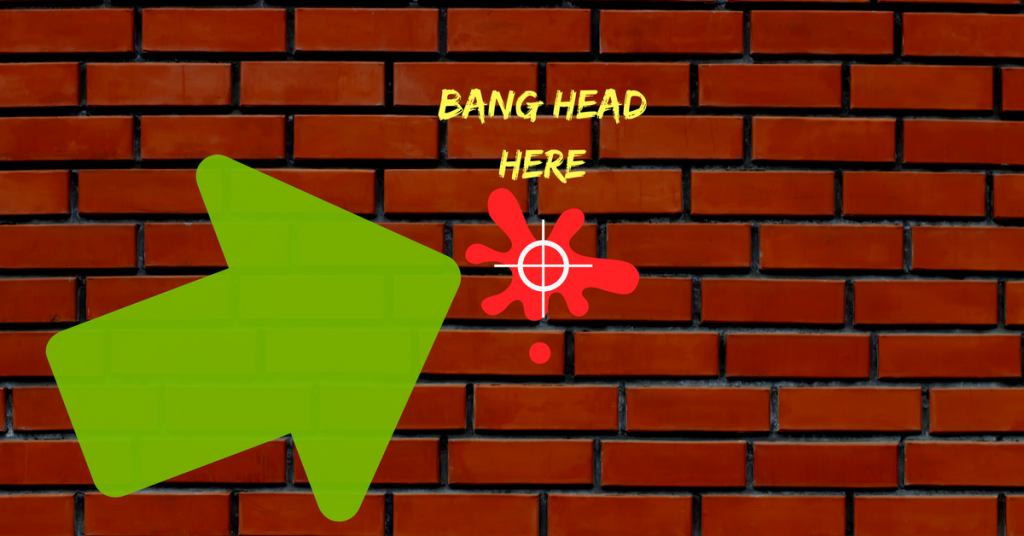 So you’re writing and you get a premise down on the page and then… it just doesn’t seem to go anywhere. Does this happen to you?

I was Skype-coaching with one of my students today and he said, I’ve been trying to write, but I keep feeling like I’m getting stuck.”

It can be super frustrating, especially when you’re just writing to put something, ANYTHING, on the page.

So how do you take that idea and make it into something?

First off, it’s important to understand WHAT you’re writing. Often you have an idea but you can’t figure out where to go with it.

Come up with an Angle

Sometimes it’s because you haven’t come up with an angle.

Writing comedy is much like journalism or script writing. You’re telling a story, but for the story to gain interest right at the setup, it must have an angle.

An angle in story writing is much like your opinion on the matter. It’s what starts to shape the premise. Without an angle there is no premise and without a premise, it’s usually not interesting.

Sometimes the angle is subtle. It’s stated in what’s called a topic statement or in script talk it’s often referred to as “theme stated.”

For example. I talk about having 5 kids. Then I say I have 5 kids from 3 different moms. Often, someone in the audience will emit an audible gasp, or a “Wow,” or “Ohhh…” That’s when I’ll laugh, point out and say, “There’s the judgement!”

Now I can talk about each relationship the curious craziness of my ex and my glaring failures.

I approach it like I’d approach writing a script from the seed of the idea. One of the first things you have to remember is a story isn’t a story without the Maxim of the 5 W’s being present.

Meaning Who? What? Where? Why? When? and How? Without answering all those questions, there’s going to be huge gaps.

In comedy, by answering those questions you start to clarify the imagery and enhance the idea by adding more specifics, more detail.

Sometimes the jokes are in the details

Sometimes the detail is what gets you to the jokes and the detail can change the direction of the joke, just like a screenplay or a story.

So my student said he went shopping for a washer/dryer with his wife. He was just looking at why he AND his wife need to go shopping for appliances. But as we stepped out the idea it began to shape up in a different way because he was inspired by a new angle.

We talked about the reasons why, answering one of the maxims. Then I asked “What?” As in what kind of washer did you wind up buying?
He said, “Samsung.”

To me, Samsung seemed like a weird answer. In my head I was thinking, Samsung doesn’t make washer/dryers!

Boom! That sparked an emotion. Which indicates a point of view or an angle. And that’s when when we started riffing on an idea that fleshed itself out to a decent first draft bit.

My wife and I bought a Samsung washer/dryer combination. Yeah, Samsung is now making washer/dryers. (This is the angle)—->That’s not cool. There’s a time when a company starts making shit outside their specialty and you know they’re just starting to get out of control. <—- Like Samsung makes cellphones, computer screens, flat screens. I mean I have a Samsung phone. Now they’re doing Washer/Dryer combos? That’s great and all, but every time it goes into the spin cycle my phone drops a call. Samsung Washers just don’t make sense…

So that got it started. But I try to treat a premise like a wet towel and wring it out for everything I can find.

Use an analogy to open up the premise

Often in a premise it’s a good idea to find an analogy. An analogy will introduce a second element (a dissimilar idea). This gives you a chance to do a listing technique and come up with possible associative jokes. And since it’s comedy, we heighten the reality.

So you ask, “What’s it like?” Samsung, the smartphone manufacturer making cellphones is like… (Here I’m going to wildly exaggerate to see if the analogy works), so the bit continues…

…That’s like buying a Kotex Motorcycle. What would their slogan be? “Already comes with the girl riding it.” Come down and buy a new, 2017 Kotex V-Twin. We’ll make you a great deal. Swear to god, No strings attached.
Nothing handles like a Kotex Motorcycle. Accelerates fast, turns on a dime, and it can navigate in the tightest places. AND, you can tell when she needs an oil change because she gets really moody.

Realize that this is just a first draft approach. I don’t even know if the jokes will stay in the set, but it’s a good effort, especially considering he felt like he was banging his head against the wall and his premises didn’t seem to be going anywhere at all.

So next time you feel like you’re stuck… start with an idea, step it out with the maxim of the 5-W’s, create an angle, drop in an analogy, look for the similarity between the dissimilar ideas and write the jokes.

It’s just one great way to keep yourself from banging your head against the wall.

« Previous Post How to Keep an Emcee’s Horrible Introduction from Tanking your Show Next Post » Holidays Can be Stressful or They Can be Comedy Gold, Your Choice!