In almost every script writing book I’ve ever read, authors like to assume there are rules to that need to be followed in the entertainment industry in order for you to break in. I’m here to tell you there are NO RULES. In fact, I think I know more people in the business who have gotten a job working as actors, writers, and comedians who basically wrote their own rules.

Mark Wahlberg, for example basically designed his own career made his own path and is now a mogul in the entertainment industry. Brian Donaldson, an IT guy from Peoria got plucked from Twitter by Late Night with Seth Meyers. And I got a job writing for the Tonight Show with Jay Leno in a very untraditional way, without experience, connections or a resume. I just proved in a phone call with Jay Leno that I could write current events jokes that were worthy.

So I have put together for you my 10 Tips to Get Hired as a Late Night TV Writer by NOT Following the Rules.

1. DVR all the Late Night Shows each week.

Spend time watching those shows and studying the monologues, desk bits and sketches. (You’d be amazed at how many people who want to write for Late Night TV are NOT doing this—mind blowing, right?).

then listen to the top Late Night TV hosts deliver their jokes. You’ll find that the rhythm of your jokes usually has a tendency to match (or come close to matching) the rhythm of one particular host. I had a student who said he couldn’t figure out which one, then he listened to Chelsea Handler. Soon after, he wound up getting a job writing for Chelsea Handler.

It may be hard at first. When I first started I could only write 3 jokes per day. With coaching and persistence and learning a process, within 18 months I was able to eventually write 80-120 jokes per day. You don’t need to hit that mark of 80-120 to work in Late Night TV. Most writers are pumping out 25-40 per day.

4. Put together a submission packet

of 2 pages of monologue jokes, a desk bit idea and a sketch idea. There’s no need to write a script for the sketch, just write the idea in a synopsis. For the desk bit, write the name, the concept, then include 4 jokes.

of the show or shows you want to submit for. Find out who the head writer is. (Usually they are credited as “Supervising Writer”). Call the show’s production office. (You can find that on IMDB Pro). Tell them “I love what you’re doing with YOUR show. I think I would be a good fit as a writer. I would love to submit a packet. Can you tell me specifically what you look for in a sample packet?” (Write down this conversation or record it so you have the details).

to match those specific requirements, write a cover letter (doesn’t need to be elaborate, just to the point). Be sure your name and contact info is on every page of the submission packet and send it in. Better yet FED-EX it or even better messenger it (if you live in the area around where the show is taped).

The head writer of a show is busy. But polite persistence pays off. Ask them if they received your packet and what is the best time frame to follow up. If they give you that information, be sure you respect it.

Your new goal is to finesse a newer fresher packet for the next submission. (Which should be every 3 months). It’s important to understand that you’re probably not going to get the job on the first submission. That’s totally OKAY! But following up via phone and submitting new writing packets helps to build a relationship with the head writer and most jobs are gotten because of some kind of a relationship.

9. Reach out to people on Facebook or in your circles

Ask anyone and everyone if they know somebody who works at one of the Late Night Shows you are targeting. I had a good friend whose buddy was the guy who held the cue cards for Jay Leno at the Tonight Show. He worked his ass off to write a submission packet and had the cue card guy deliver the packet to Jay Leno. In two months, he got a job as a contributing writer for the show and eventually ended up on staff.

10. Find out where the hosts are making personal appearances and show up.

Bring a sample writing packet with you. If you are fortunate enough to make contact with them then give them your packet. I would include a mailing label with the address of the production office on the envelope along with a return address. If you can’t meet with them. Find the stage manager of the auditorium where they are appearing. Ask him to deliver it to the host.

So these are 10 kick ass tips for getting your packet written and submitted. There are no guarantees in this business. Your only guarantee is YOURSELF. But, if you never give up, you continue improving, you continue submitting and you continue building your relationships and I can assure you that you will get noticed and most likely (if your skills are solid), you will get a job in this amazing business.

Please leave me a comment below. Part of your job is to develop a conversation even comments on forums can help to start you on the path to developing relationships! 🙂 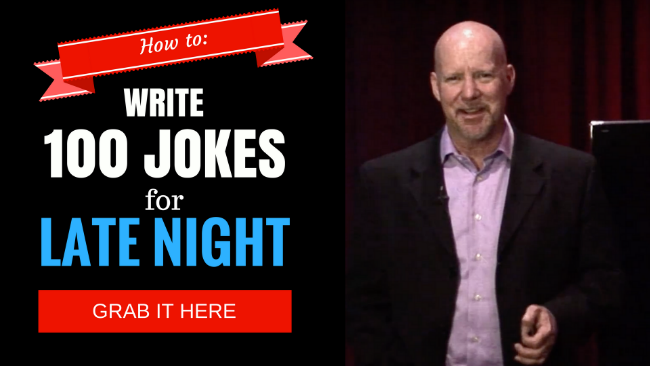 « Previous Post Are You Taking Advantage of the Immense Opportunities in Comedy? Next Post » The First Key to Success no Matter What Your Specialty